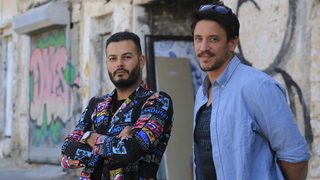 I don’t get what you Arabs are mad about.

You want equal rights and to live in our country, but you don’t serve in the IDF.

You flocked the ballots and got screwed over again, believing in co-existence is just being naïve.

So yeah, when I hear that [Arab] accent, I’m always suspicious.

You identify as a Palestinian, so how can we be neighbors??

Listen, it’s fucked up. Wherever there are Arabs – there are terror attacks and you actually expect to get into night-clubs.

Why don’t you stop harassing our women?? I mean, you’re still stuck in the past. ‘Murder for family honor’, come on what the fuck??

You live in clans, fire rifles at weddings, drive like assholes, abuse your animals, steal cars, beat your own women and then always complaining – when will you start fulfilling your duties?!

Even a Bedouin Arab wearing a (IDF) uniform seems suspicious to me.

Well, how can we talk about unity? For every Arab doctor and pharmacist there’s one that prefers to live separately, so what, just wait for some “Mahmoud” to grab a knife and scream “kill all the Jews!”?!

There are no free meals. Learn how to speak proper Hebrew, let’s start there. Pay taxes and build legally like everyone else. Forget the Quran already and open up to the world!

I just lost hope. Hard to imagine the day when we could live in harmony.

Guess Kahana was right when he shouted “Separation.”

Maybe you are better off in Gaza and the West Bank.

I’m not racist, I swear, but there’s a cultural abyss between us and there’s a reason Judaism is about life, repairing the world and free love, and you educate children to hate in the name of Islam, for god’s sake!

And all you care about is Allah and Naqba and the Jihad and the honor that controls your urges.

Leaders that preach to fight everyone else.

A blind public that doesn’t think and just follows like sheep. Complain about everything, cry about how bad it is.

Blame everyone else instead of looking in the mirror.

Give us some more reasons to be afraid and avoid trying to come closer and live together, seems there’s nothing left to do.

Forget serving in the IDR, why not do national service instead?

How dare you take from the country’s budgets? If you don’t serve the country, I consider you enemies, you Arabs!

I’m not racist. Just keeping distance that’s all. Tzachi married Lucy, yeah right, he’s not a leftist.
A star of ‘Fauda’ and an Arab, that’s just cheap publicity. You’ve proven it’s possible otherwise. After all, you’re already in the Knesset and the national soccer team, but even there, you don’t really want to share.

Trojan horse, back stabber, Amalek descendants. Mix the stucco, Ahmed! You’ve always been good at that. Just don’t do an “Arab job;” don’t be sloppy. If you’re not satisfied, there’s always a substitute. We’ll replace you with some Sudanese – how’s that??

I’m not a racist. I know there’s another side to the story, I’m not trippin’. I’m not racist. We share this country, but the hate never stops. Wish our reality was different. I’m not a racist, I swear.

You Jews forgot what it’s like being a minority. You started as a melting pot, but now you’re all about nuclear reactors, apartheid and racism.

And enough with the cultural bullshit. Half of your lexicon is Arabic words. “Sababa, Dahka, Yalla, Bassa, Achla Dawwin”.

Enough, I am Palestinian and that’s it, so shut up.

Even if 2000 years passed, I’m still here standing strong. Afraid of my language, you are ignorant, your time has passed.

I don’t support terror, I’m against violence. But 70 years of occupation – of course there will be resistance.

When you do a BBQ and celebrate independence, the Naqba is my grandmother’s reality, motherfucker!

You say, “A good Arab is a dead Arab” and then actually complain that I don’t serve.

This government makes me a second-class citizen. Nation-State Bill only adds to the mess.

The anthem doesn’t represent me nor does the Star of David.

Installing streetlights in our neighborhood is a celebration.

The country sees me as a terrorist, not a human being. Don’t talk about equal burden, when we have no equality.

First thing first – sit down, shut up, and listen.

How will I open a business if I cannot get into a bar? Mizrahi Jews also eat shit because of the similarity, don’t they? This is not normal.

In 1948, you kicked out my family. The food was still warm when you broke into our homes, occupying and then denying; the truth isn’t easy.

You can’t speak Arabic and you know nothing about your neighbor. You don’t want me to live next to you, but I built your house.

You don’t know the accelerated heartbeats every visit at the airport.

“Feeling like a VIP”, guards on each side – you have no idea! And everything you say is bullshit. “You have 22 Arab countries”, “Are you a Christian? You don’t look like one.”

I’m sick of this! I am Sameh from Ramla – I will never forget where I came from! I’m not racist, I’m mad. I miss my family, haven’t seen them in a long time.

Yeah right, “educating to hate in the name of Islam.”

For years you’re committing genocide 20 in Gaza, so much spilled blood! And all you care about is money and power and the occupation and ruling as the “chosen people”.

You think you’ve been through the Holocaust so everything is allowed. You ruined Jaffa and Acre what will happen tomorrow?!

What, are you crying? You’re not those who were deported. You were respected guests at our homes while murdered in Europe.

Giving me a passport, you aren’t doing me no favor. Even if my home is destroyed, fuck it, I hold my head up high.

Enough… I’m standing tall. I’m not one of those Arabs you tame. I have dreams and ambitions, I want to fly high.

Hear me out, I’m not transparent, remember this face!

You must admit you’re a racist people. Even the “state of Tel Aviv” and all the other leftists, but at least they try not to see us as different.

I’m not racist, but I had enough.

Thought I’m in a nightmare and only after waking up I realized my life is not worth a penny, I just want to live. And I’m being deprived of the beautiful life I dreamed of.

You take care of yourself, but you hurt me. You are going to learn to accept me, I’m an Arab.

If we would only open our eyes and hears, my friend, we’d see there’s no difference between a priest, an imam, and a rabbi.

I’m not racist. I want to make my son proud for attempting the impossible.

I’m not racist. We both have no other country, and this is where the change begins.

Let’s talk straight. We’re fed up with racism, fear and hate. How will our children’s future look like?

Back
Back to top